You're Invited: It's My (Book Launch) Potty! 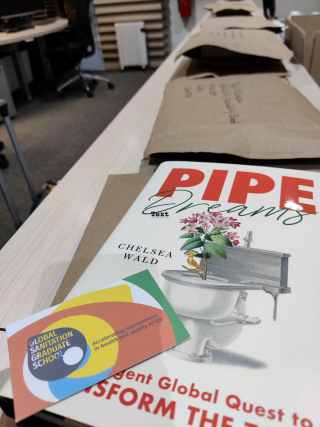 Last year, as Pipe Dreams was about to come into the world, I felt a deep gratitude for the many people in the wastewater and sanitation world whose hard work and generosity of time and spirit I had relied on in the making of the book. I wanted to give back to them, but they numbered in the hundreds, if not thousands, and I simply didn't have enough copies to pass out.

At the same time, I had to confront the fact that my book would be difficult to get, as well as far too expensive, in many parts of the world that I had written about.

So I hatched a scheme: to ask people in sanitation and wastewater to help me select libraries to which I could donate copies of Pipe Dreams—libraries whose users would likely want to read the book but that couldn't otherwise afford it. These people stepped up by nominating more than a dozen libraries.

Then IHE Delft Institute for Water Education (with special thanks to Dr. Claire Furlong) generously offered to cover the shipping of the majority of the donated books.

I'm so pleased to say that last week a large and final batch of books went out to academic, organizational, and community libraries around the world.  In the end, copies of Pipe Dreams have been sent to destinations including:

My greatest hope for Pipe Dreams is not that it will become a bestseller or bring me attention or fame--it's that it will be useful. This seems like a step in the right direction.