What does it take to be a forensic scientist?
Operating instructions: A haiku of gratitude

The Art of technology: "Behind every chip stands a human being" 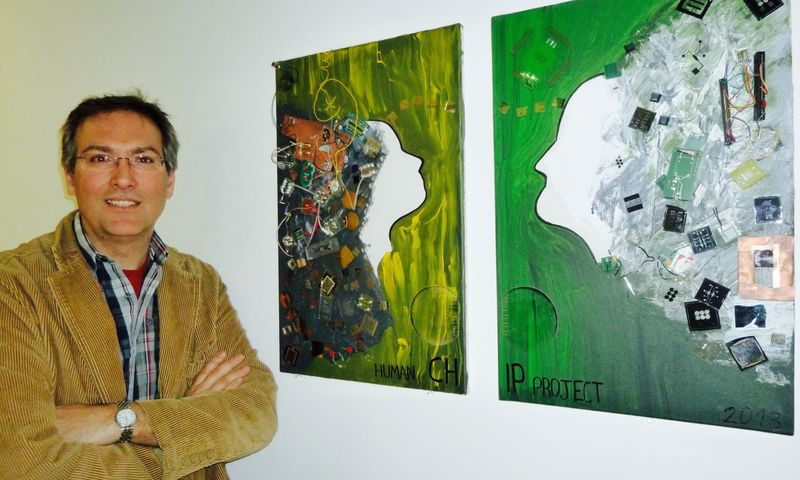 In March, bioengineer Peter Ertl invited me to his lab at the Austrian Institute of Technology in Vienna. Peter, whom I first met at the Halloween party of a mutual friend, had spoken to me about the professional value of Viennese balls for a story in Science Careers. After that, we were both curious to learn more about the other’s work.

It turns out that Peter oversees a fascinating and wide-ranging program of research that aims to bring lab-on-a-chip systems to many areas of biomedicine. He works his many students and postdocs hard, but he also expresses genuine concern for their well-being and their futures. One way he encourages them to get perspective on their work as well as blow off steam is by creating art projects out of the lab’s discarded chips, which they do at an annual dinner.

I asked Peter to tell me more about one piece of collaborative student art, entitled The Human Chip Project, pictured above. Here is what he said.

The students tried to express their thoughts and ideas in these paintings using high technology – very expensive, actually, paintings. One of the chips is around 1,000 euro, so this [artwork] is around 100,000 bucks, right there.

We’re using very nice materials like gold, platinum, nano-fullerenes – all the stuff that is expensive and very, very noble. Not the copper but the rest.

There are lots of memories, lots of tears I can see here too.

[Some of the chips in the painting are] smart implants to measure bone healing kinetics. The idea was to penetrate the bone with electric fields to a couple millimeters, to measure the density and porosity, particularly in fibrosis patients.

Up there, I think that was the allergy on a chip. That was actually about babies. If you take a plasma sample and can predict [the potential for allergies] to different foods, that would be a nice way to help out.

This is our stem cell project, where we have micro- and nano-structured surfaces, and we see how stem cells react to different environmental cues. This is a completely new design that we actually wanted to patent: a double-triple interdigitated interdigitator, which was a fun simulation turned into a beautiful publication.

Never got anywhere, but now at least we have it on an artwork.

In the end [a project] did work or did not work, but most of the time it’s a lot of pain, lot of effort, to actually set up these chips.

We have lots of chips and behind every chip stands a human being.

It’s important for students to express their need for creativity, not only in the lab but also outside it. Art is part of what we do despite the fact that it’s technology.

PIPE DREAMS: The Urgent Global Quest to Transform the Toilet is coming on April 6 from Avid Reader Press
Pre-order from Bookshop.org, Amazon, Barnes & Noble, BAM!, IndieBound, or your local bookstore.
Books and toilets: a great combination!
Here's my list of necessary reading from Bookshop.org.