How I would fix that scene in Gravity with the questionable physics
Paul Robeson: An unlikely Passover hero, waiting in the seder's wings 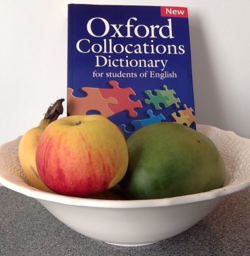 Dictionaries and fruit: Not a common collocation

I’m disappointed that the subtitle of this dictionary is “for students of English.” That is, unless they mean that we are all, in our ways, students of English. Perhaps as a writer, I’m a student of English more than most, and that’s why I wish it had come into my life a long time ago.

Ah! This blog post is greatly much profoundly deeply indebted to Helen Fields, who invented the genre of dictionary reviews (as far as we both know) for her blog. She also invented Bug on my Window, so you can see she is a genius. The idea is that I’m going to write a little bit about why this dictionary is awesome and then, at the end, I’ll give you some relevant stats, like what some of the entries look like and whether there are obscenities in the dictionary (spoiler alert: No.).

So, back to collocations. A collocation is something you use all the time when you speak: a combination of words that go well together. It’s nothing so complex as an idiom; indeed, it requires no thought at all for native speakers. It’s how you know you can get caught in a heavy rain but not thick rain, or how you know to order a light beer but not a diet beer—you just know.

But as anyone who has spoken known understood used learned taught mastered studied a foreign language knows, this is one of the hardest things for a non-native speaker to learn. I get collocations in German wrong, like, 99 percent of the time. When I use a German dictionary, very often it’s to find the right collocation, but that’s for writing. (Maybe you’ll get a review later about the awesome dictionary I use for that.) When I’m speaking, I’m saying the equivalent of thick rain and diet beer nonstop. Luckily, people can often understand me, but it sounds extremely fairly very incredibly terribly sehr awkward.

But I’m going to argue that the Oxford Collocations Dictionary goes well beyond its subtitle and is also useful for native speakers, at least native writers. Once I saw it, I realized that almost every time I reach for a thesaurus (or google for one), what I really want is a collocations dictionary. That’s because whenever I find choose pick look up a word in the thesaurus, it’s not because I’m trying to diversify my word use—that always leads to finding the wrong word when you already have the right one, a absurd bad mistaken ridiculous stupid crackpot crazy mad outlandish wild terrible idea. No, it’s because I can’t find the precise very exact word I want, and that word is very often part of a collocation. With a collocations dictionary, all you need is one word, and it will give you the other.

Take a recent story I wrote for Nature. It was about scientists who had accurate reliable comprehensive detailed extensive preliminary raw oh to heck with it data showing that birds in V-Formation coordinate their flapping in order to save energy. We didn’t want to say it was proof that they save energy—that was too strong—so we went with compelling evidence. If we didn’t want to use compelling for some reason, we could look up the word evidence in the collocations dictionary and find a slew of adjectives that go perfectly well with evidence: clear, conclusive, convincing, decisive, definitive, good, hard, incontrovertible, irrefutable, overwhelming, persuasive, positive, powerful, solid, striking, strong, unambiguous, unequivocal. Obviously, not all of these would work in context, but they are more appropriate than the words you would find if you looked up compelling in a thesaurus (for the record, from Thesaurus.com: fascinating, constraining, coercive, compulsory, forcible). Come to think of it, I’m pretty fond of persuasive and striking—hold on a second while I make a note of them.

There are two drawbacks to this dictionary: There aren’t enough collocations in there. Just from this post, I tried to look up go + together (under together, where you should also be able to find, say, fit) and invent + genre (under genre, which has lots of collocations), and neither were there. To really be useful for writers, it needs to be bigger, MUCH BIGGER. Do you hear me, Oxford University Press?

The other downside is that it is not mine. I have to return it to my librarian husband’s library, where the international staff at his office frequently use it. I will miss you, Oxford Collocations Dictionary. I say wish you bid you a emotional tearful sad silent fond farewell.

Subtitle: for students of English

Guide word on p. 106: catastrophe noun
ADJ. absolute, big, complete, great, major, terrible, total | minor | national | global, international, world | ecological, economic, environmental, financial, human, humanitarian, natural, nuclear ◇ The country is on the brink of a humanitarian ~. | imminent, impending, potential
VERB + CATASTROPHE be | cause, lead (sth) to ◇ These policies could lead us to environmental ~. | have ◇ We had a few ~s with the food for the party. | be faced with, be heading for, face ◇ The area is now facing economic ~. | avert, avoid, head off, prevent ◇ moves to avert a national ~
CATASTROPHE + VERB happen, occur, strike, take place

Introduction: Very short. Once you grasp the idea of collocations, the dictionary and its entries don’t need much explaining. If there’s some abbreviation you don’t understand, you can of course look it up in the guide in the introduction (e.g., esp. BrE means that a collocation is used particularly in British English).

Thematic pages: There’s a page on fruit. It covers collocations related to growing fruit, tasting fruit, preparing and preserving fruit, parts of fruit, and more. There are only ten of these thematic pages. I find it depressing that one is on meetings (circulate an agenda—gah!).

Study pages: Really for students of English as a second language, these are for practicing common collocations on various topics. For example, fix the incorrect collocation in this sentence: Police carried out a raid on the premises early this morning and did two arrests. (Most of you won’t need the study pages, but they’re a good reminder of how hard it is to learn to speak English in a way that sounds natural. Max props to those people I know who have.)

Obscenities: Sadly, no. Would be so great to see the list of collocations for some four-letter words. But nothing, not even bloody. (Update: Hell is in there, but bloody is not one of the suggested collocations.)

Order Pipe Dreams: The Urgent Global Quest to Transform the Toilet from Bookshop.org, Amazon, Barnes & Noble, BAM!, IndieBound, or your local bookstore.
Books and toilets: a great combination! Here's my Big Toilet Bibliography and my list of necessary reading from Bookshop.org.