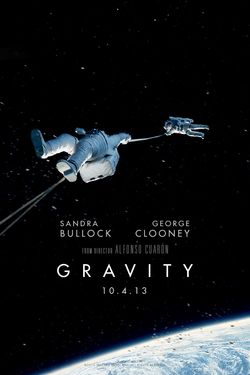 I know I’m late to the party, but I finally saw Alfonso Cuarón’s space movie Gravity last night. Like Neil deGrasse Tyson and nearly everyone else, I really enjoyed it. That’s why it’s gnawing on me that a pivotal scene relied on some dubious physics.

It’s the one in the promotional image to the left. (If you’ve haven’t seen it yet, I’m shocked, but SPOILER ALERT.) Astronauts Dr. Ryan Stone (Sandra Bullock) and Matthew Kowalski (George Clooney) are in space suits, trying to board the International Space Station. Unfortunately, they approach it at high speed and ricochet around, at the risk of bouncing or sliding off into space, never to come back. Fortunately, some cable catches Stone’s ankle, and she in turn catches a loose tether attached to Kowalski’s suit, forming a chain. They stop in this position to have a conversation, but it’s clear that Kowalski is being pulled out into space, and he eventually releases his tether in order to let Stone survive and return to the ISS.

As many have pointed out, the question is: What the heck is pulling Kowalski out into space? In many, many, many, too many movies, this scene appears like so: Character 1 is hanging over an abyss, with only character 2 to hold him or her, usually by the wrist. Gravity is pulling down, and character 2 either is or isn’t strong enough to hold character 1, so either saves or drops him or her. (In a twist, sometimes character 1 lets go as a self-sacrifice to save the other person, as Kowalski does.)

But in the movie Gravity, the force of gravity is not in play, since it takes place in space. So there’s no reason that Kowalski, once stopped, should float out into space once released. He should just stay where he is. In fact, it’s worse, as Tyson tweeted:

Mysteries of #Gravity: When Clooney releases Bullock's tether, he drifts away. In zero-G a single tug brings them together. 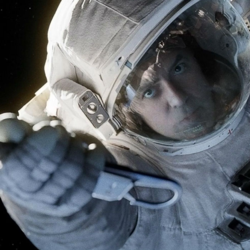 Some have argued in favor of the physics in this scene, but even if there is some reasonable explanation having to do with momentum or centrifugal force, there’s clearly something wrong when smart people like Bad Astronomer Phil Plait is in the audience wanting to scream, "'CLOONEY DOESN’T HAVE TO DIE!’"

I’m with Plait, of course, but I’m not content to just scream silently in my head. I want to fix this, dammit. As I lay awake after watching it, this is what I came up with as an alternative to this scene:

We start in the same configuration as in the promotional image, with a cable insecurely looped around Stone’s ankle. It has stopped her from floating out into space. She is holding Kowalski’s tether, arm extended, and he has also stopped moving. (I would venture to say that it’s highly improbable that they would actually end up in this position, but the movie is built on improbabilities that are physically possible, so I’ll allow it.)

It appears they are saved. Now all that’s needed is for her to pull him to her, and for them to use the cable to get back to the ISS. But as she pulls, her leg makes a stray kick, accidentally releasing the cable; worse, kicking it just out of reach. Instead of Kowalski coming to her, she and Kowalski move together. Now they are floating within spitting distance of the ISS (especially in space, where the spit would fly forward forever), but with no way to get there. He has no fuel in his jet pack, and she is quickly running out of oxygen. There’s only one thing to do: He will push her toward the station so she can board it. As a result, he will go flying off in the other direction, never to be seen again. Just like in the original, he sacrifices himself to save her, but in a way that makes physical sense. As he floats away, they have the same touching conversation as in the film.

So that’s my solution. I think it both makes the physics more realistic and avoids the clichéd cliffhanger scene that I have come to resent.

But, gosh, I could be wrong, either from the standpoint of physics or of dramatic integrity. As I was doing the necessary thought experiments to reimagine the scene, I realized that it’s harder than it would seem to work out cause and effect in zero gravity. (I kept going back to the cool frictionless sleds we had in teacher Aaron’s physics class at the fabulous Edmund Burke School in Washington, DC.) That gave me all the more respect for the rest of the film, which gets it really right a very large portion of the time. Seriously, it’s spectacular.

If the screenwriters had only thought to do that, I wouldn't have turned the movie off in disgust. Was the movie beautiful, harrowing and stimulating to watch up to that point? Absolutely! Was that scene so monumentally stupid that it made me want to shout? Definitely. I was so taken aback I didn't bother to watch the rest and turned it off right after she got into the ISS.

Thanks for the comment, John. I was contemplating why this particular scene bothered me so much when there were several other problems with the science in the film (for example, the fudged orbits of various space objects and the extreme unlikelihood that someone could use a fire extinguisher as a makeshift jetpack). I decided that I didn't much mind it when they used questionable physics to save someone's life, but I really hated it when they used it to KILL someone. It made Clooney's character's death seem completely contrived. Nonetheless, I'm happy I didn't turn it off, because it pulled me back in pretty quickly. The reentry scene at the end is particularly stunning.