Astronaut or cosmonaut? Just don't call her a "space woman." Little did we know that the word for "person who went into space" would be an unintended theme for the evening. The panel consisted of four women from different countries who had been in space. (Valentina Tereshkova, the first woman ever in space, was supposed to be there, but she had returned to Russia unexpectedly for "special professional reasons." She's the one in the photo above.) The moderator was a man who had been in space with the Soviet program, Romanian Dumitru-Dorin Prunariu. When the director of the United Nations Office for Outer Space Affairs introduced him, she accidently called him an astronaut. "Cosmonaut," she quicky corrected herself, embarrassed.

My husband and I looked at each other. Wasn't it funny, not only that these diverse words existed where one would do, but that they still carried enough weight to embarrass a U.N. official? Japanese astronaut Chiaki Mukai said in her presentation that the world is moving away from space travel for national pride, and into an era of international cooperation. But in the same presentation she not only used the words astronaut and cosmonaut, but also taikonaut, the new-ish word for "person who went into space with the Chinese space program." (And I think she may have used another term, but I didn't catch it. It might have been spationaut, sometimes used for French space travelers.) The continuation, not to mention proliferation, of these words certainly contradicted the notion that national pride was going out of fashion in space travel.

A point of etymology: The ending –naut means sailor in Greek. Astro- means star, and cosmo- means universe, both also in Greek. Taiko-, on the other hand, comes from a Chinese word meaning space (which is also the meaning of spatio- in Latin). 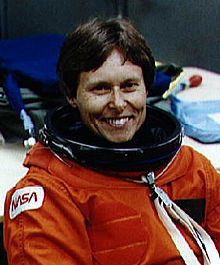 Also a point of meaning: It's significant when I say "went into space." Someone isn't officially an astronaut until her first trip into space. The United States defines space as an altitude 50 miles; the Fédération Aéronautique Internationale says 100 kilometers. It's an open question whether space tourists, or just professionals, should get the title of astronaut. Spaceflight participant is currently preferred. Bummer for spaceflight participants.

Astronaut and cosmonaut didn't even exist when Canadian astronaut Roberta Bondar (pictured left) was growing up, she said to the packed crowd in the museum's atrium. Back then, nobody had gone into space, but if someone had, he would have been a "spaceman."  So when she was young, she said that she wanted to be a spaceman when she grew up. It was only when Tereshkova became the first woman in space (50 years ago on this coming Sunday, June 16) that she "realized that there was a difference between spacemen and spacewomen," she said.

At first, the difference was a pretty big deal, but over time, it has receded into insignificance. Experience has shown that both sexes are suited to the rigors of space travel, said American astronaut Janet Kavandi. She sat on the committee that selected the most recent class of astronauts for the U.S. program. Since the classes these days are so small, she said, the candidates must have a wide mix of skills and experiences – that is, they have to be exceptionally accomplished in more than one area, from science to electronics to medicine to fitness. The committee wasn't aiming for a specific sex ratio, she said, but "the women compete easily with the men." The outcome of the selection won't be announced until next week, but she indicated that class would be groundbreaking. Fifty percent women? More? "You'll be pleased to see the results," she said.

Everyone not leaving the thermosphere is just a better version of Felix Baumgartner... And only a moon walk should qualify you to become a Naut!

Ha, I thought about Felix when I wrote this. Oh, and the new class of US astronauts is indeed 50 percent women. First time ever: http://www.whitehouse.gov/blog/2013/06/17/new-astronaut-class-begins-its-journey.