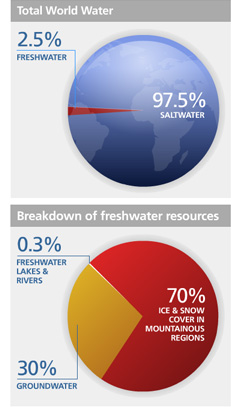 We know shockingly little about the world's underground water, considering how much of it we use. My newest feature (subscription only), in New Scientist this week, discusses promising new technologies for learning more about this important resource.

Alfonso Rivera, chief hydrologist at Natural Resources Canada, and I had a long conversation about the work he is doing to map Canada's groundwater. It's an excellent illustration of why this topic should be of interest to everyone, not just people who live in arid places, but unfortunately it didn't fit into the final, published version.

His thorough mapping study of 30 important aquifers, which began in 2003, is the first such study in Canada since 1967. In those intervening decades, the percentage of domestic water in Canada that comes from aquifers has risen from 10 to 30, not to mention the skyrocketing use of aquifer water by industries such as shale gas and tar sands mining. So it was high time to check out what was going on down there.

After mapping 12 of the aquifers, he and his team discovered a troubling pattern: most of the aquifer water is so-called “fossil water” – old water that got trapped underground during past ice ages and isn’t being recharged. What’s more, the aquifers that are recharging are doing so more slowly than expected. In an article, Rivera calls this, rather poetically, "the incongruity of water scarcity in a water-rich country." (Download the pdf. It's a good read.)  And Canada is water-rich: By some counts, it has 20 percent of the world’s easily accessible freshwater.

What Canada has come to realize is that they can't assess the risks without good data. Last year, a report (pdf) from Canada’s National Round Table on the Environment and the Economy claimed that basic data on Canada’s water supply is inadequate. Without more research, they simply can't know if or when their water will run out or become undrinkable.

They are taking steps to remedy that lack of data. We should all follow suit.

Here are some additional resources for people who want to dig a little deeper on the topic:

U.S. Secretary for Energy and Nobel Laureate Steven Chu gave a keynote address to the IAEA's 2011 Scientific Forum on Water Matters. That conference that planted the seed for this story.

Global groundwater maps from the UN are about the best we've got so far, but we need better ones. And here are some UN water statistics that illustrate why, including some fun pie charts (including the ones in the graphic above).

The IAEA has an informative website for the Nubian Aquifer Project.

Jay Famiglietti's exceptional blog gives his take on world water issues. Here's also in this video, part of a series called The Future We Create. He's also featured in an upcoming documentary, Last Call at the Oasis. You can watch the trailer.