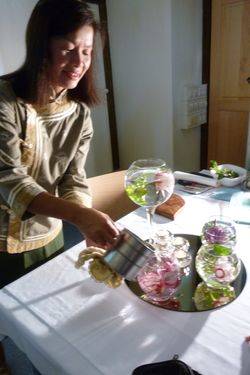 At a seminar I attended recently, two kinds of artists were called in to help put on display the diversity and beauty of radishes and turnips. The organizers from the Horticultural College and Research Institute Schönbrunn (above all Wolfgang Palme from my previous blog post) grew more than 90 varietals in their greenhouses and fields for this event, which was intended primarily for people in the food industry, from farmers to restaurateurs. They gave some of this produce to the artists to work with.

One was Vienna's Vegetable Orchestra. They gave a rare outdoor performance for the seminar participants. They played on heirloom varieties of turnips and radishes in several ways, including as wind and percussion instruments. You might not recognize the vegetables in the photo below, but they're definitely related to the classic versions in your local supermarket.

Another was Vienna-based Chinese artist Lai Ha Leong Rohsmann, who has pioneered a style of carving vegetables (apparently there are traditional Asian versions of this craft -- particularly from Thailand -- but she is self-taught). She treated the participants to a live demonstration of her art, in which she carved several flowers and a mouse out of turnips and radishes. Afterward, she showed participants around an installation she had created especially for the event just hours before, as the artwork does not last long. 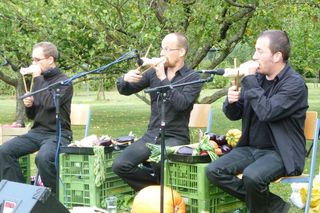 As I was watching the presentations, it dawned on me that the vegetable art is not just about beauty and diversity. Indeed, vegetables are an apt medium for exploring the theme of the transience and fragility of life. Rohsmann's creations last a maximum of three days in cold water (and another two if frozen). For her, they represent our lives -- how fleeting and beautiful they are, and how, after they are gone, still serve to foster new life.

Similarly, the Vegetable Orchestra instruments are made the same day of the performance, and many of them are violently destroyed while being played. This can be dramatic and even upsetting to watch. However, the members manage to turn this feeling on its head by serving a vegetable soup made with the trimmings of its instruments after every performance. 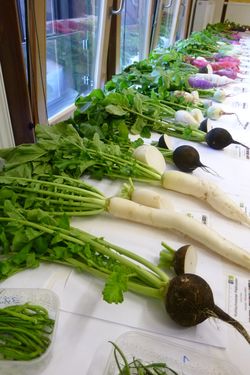 Vegetable art is also a meditation on imperfection and uniqueness. The Vegetable Orchestra has fixed compositions, of course, but the instruments are never exactly the same -- meaning no performance could ever be the same. Same for Rohsmann's creations, which are made with vegetables of varying quality, not to mention size, color, and shape. One of the greenhouse-grown turnips she was carving turned out to be rotten in the middle -- causing groans of sympathy to ripple through the audience. Unconcerned, she just threw it away and started on another.

Perhaps the best part of vegetable art, though, is that it's something we all can do. It's fun to watch kids bopping away at a Vegetable Orchestra performance because it's clear what they're thinking: I can't wait to get home and raid the refrigerator!

Do you want to get your hands on some heirloom vegetables -- to eat or to make art with? If you're in Vienna, check out the Terra Madre market next weekend (October 13-15) at the Rathaus.