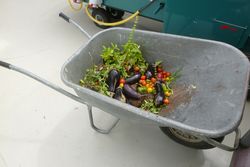 Most recently, for a New Scientist CultureLab story, I got to go to the greenhouse of the Horticultural College and Research Institute Schönbrunn, which is behind the Gloriette at the Schönbrunn palace. It's there that the college's students learn to grow everything from vegetables to ornamental plants.

I happened to arrive when the tomatoes were ripe. They were gorgeous -- in every shape and color that a tomato can come in -- and they tasted incredible. The photo above is of the stuff they were throwing away. Yummy trash! 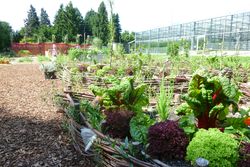 My host, Wolfgang Palme, showed me some of his innovative outreach projects, including the Vegetable Orchestra one I was writing about. I was also impressed by his Michelle Obama-style program for children. He and his colleagues planted a stunning outdoor teaching garden and invited students to come taste everything in it, from lettuce to edible flowers. The kids then got to plant their own window gardens to take home.

As the gardens grow, the children will make notes and then send their notebooks to Palme, who will declare one of them the Young Gardener of the Year. I was sad to hear that Palme is having a hard time finding funding to continue this program. I know some ag company would be all over it in the United States, but apparently corporate sponsorships are less common in Austria. 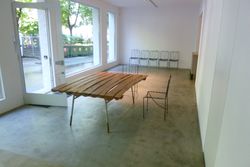 Thanks to another New Scientist story (subscription required), I also got to visit the Vienna studio of artist John Gerrard. It's not a traditional studio with paint and canvases or whatever, since his work primarily uses computers. Instead it's a flexible, open space that he can use in many ways, including to host dinners, which he does a few times a year.

Apparently the meals smell so delicious that dogs continue to pop their heads in for a sniff for many months after. A very cute one showed up while I was there, and we both stopped our conversation to ogle it. We were sitting at the beautiful table in the photo.

If you happen to walk by, you can feel free to poke your head in, too. They have an open-door policy.

One of the newest buildings in Vienna belongs to the Research Center for Molecular Medicine of the Austrian Academy of Sciences (CeMM). I profiled one of their investigators for Science Careers. I love this time-lapse video of the building of the facade. The inside looks just as great.