What is Deutsche Welle? 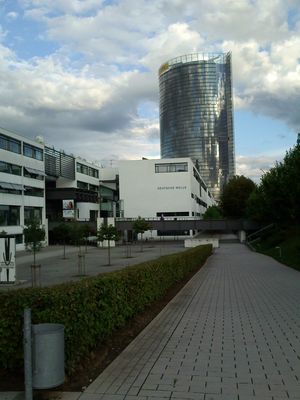 So I'm on a fellowship that has me working at Deutsche Welle in Bonn, Germany, for two months.

What is Deutsche Welle, you ask?

Actually, many Germans might ask the same question. That's because Deutsche Welle's content is intended not for Germans, but for people in other countries around the world.

The news -- online, radio, and television -- goes out in 30 different languages, and is about Germany, Europe, and pretty much everywhere else. Through independent journalism, it promotes intercultural dialogue, tolerance, democracy, and human rights.

If you're familiar with Voice of America, that's a pretty good approximation. VOA started in 1942; DW in 1953.

The entire operation takes about 1,500 employees, hundreds of freelancers, and 275 million Euros from German tax revenue. Oh, yeah, and one Burns fellow. I work for the English section.

I went on a tour for new employees and interns today, and I took some photos so that I could give a little bit of an insider's look at Deutsche Welle. 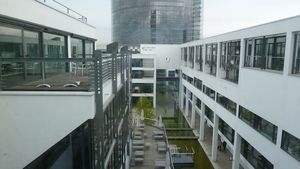 You'll notice that the building is new, huge, modern and, well, expensive-looking. Architect Joachim Schürmann did not design it for Deutsche Welle. He designed it to house members of the German parliament, back when Bonn was the capital of Germany.

But things changed when, first, the Rhine flooded the construction site in the early 1990s, and, second, parliament decided that it would rather be in Berlin after the reunification in Germany (whose 20th anniversary, incidentally, is in less than a month).

Things finally came together in the early aughts, when the building, finished after more than a decade, became the new home of Deutsche Welle's online and radio offerings (TV is in Berlin). Apparently its old home, in nearby Cologne, was full of asbestos. 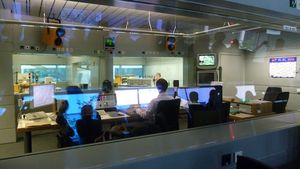 Also in the old government district -- in fact, nearly on top of Deutsche Welle -- are the Deutsche Post headquarters (in the background of the top photo) and a UN building.

The highlight of the tour was when we got to see a live broadcast of a Romanian news show. I've worked at radio stations before, but the nonchalance of live radio hosts always takes my breath away. This one showed up, like, two minutes before she needed to go live. I think I would give it 10, just in case I tripped in the hallway and broke my leg and needed to find a replacement. Or something.

After the tour, my roommate and officemate joined me for lunch in the cafeteria. The cafeteria here is pretty gourmet. I ate ostrich goulash yesterday. Today, I had fish. 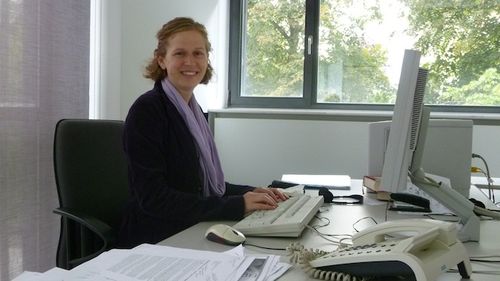 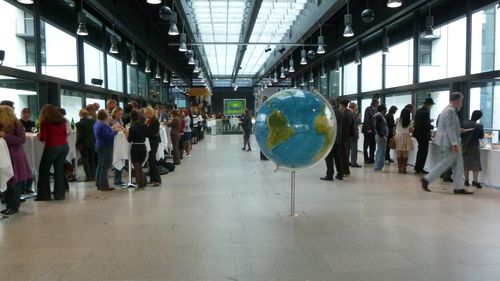