Confessions of a science-fair failure
Were you worried? 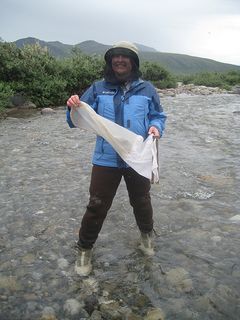 I'm on my way to Toolik Field Station, 12 hours north of Fairbanks, Alaska, as Marine Biological Laboratory Polar Fellow. I'm going to be blogging at the ScientificAmerican.com Expeditions blog (first post here), but I may also post a few personal notes here.

My main concern is that I'm going to be a total wimp, especially about the mosquitoes. I've ordered a full-body mosquito-repellent suit, but I hear even that won't be sufficient to prevent the aggressive Alaskan bloodsuckers from turning me into a mass of giant welts.

My only hope for survival is humor. And, for that, I turn to Mark Twain. I didn't learn until a few years ago that in his time he was best known as a travel writer. His book A Tramp Abroad, about his travels in Europe, is one of my favorites of all time, in any genre. What makes him so funny is that he's not afraid to be utterly silly, as in this description of what I assume are bedbugs (from http://www.mtwain.com/A_Tramp_Abroad/24.html; I have inserted paragraph breaks for readability):

Next morning we left in the train for Switzerland, and reached Lucerne about ten o'clock at night. The first discovery I made was that the beauty of the lake had not been exaggerated. Within a day or two I made another discovery. This was, that the lauded chamois is not a wild goat; that it is not a horned animal; that it is not shy; that it does not avoid human society; and that there is no peril in hunting it.

The chamois is a black or brown creature no bigger than a mustard seed; you do not have to go after it, it comes after you; it arrives in vast herds and skips and scampers all over your body, inside your clothes; thus it is not shy, but extremely sociable; it is not afraid of man, on the contrary, it will attack him; its bite is not dangerous, but neither is it pleasant; its activity has not been overstated -- if you try to put your finger on it, it will skip a thousand times its own length at one jump, and no eye is sharp enough to see where it lights.

A great deal of romantic nonsense has been written about the Swiss chamois and the perils of hunting it, whereas the truth is that even women and children hunt it, and fearlessly; indeed, everybody hunts it; the hunting is going on all the time, day and night, in bed and out of it. It is poetic foolishness to hunt it with a gun; very few people do that; there is not one man in a million who can hit it with a gun. It is much easier to catch it than it is to shoot it, and only the experienced chamois-hunter can do either.

Another common piece of exaggeration is that about the "scarcity" of the chamois. It is the reverse of scarce. Droves of one hundred million chamois are not unusual in the Swiss hotels. Indeed, they are so numerous as to be a great pest. The romancers always dress up the chamois-hunter in a fanciful and picturesque costume, whereas the best way to hunt this game is to do it without any costume at all. The article of commerce called chamois-skin is another fraud; nobody could skin a chamois, it is too small.

The creature is a humbug in every way, and everything which has been written about it is sentimental exaggeration. It was no pleasure to me to find the chamois out, for he had been one of my pet illusions; all my life it had been my dream to see him in his native wilds some day, and engage in the adventurous sport of chasing him from cliff to cliff. It is no pleasure to me to expose him, now, and destroy the reader's delight in him and respect for him, but still it must be done, for when an honest writer discovers an imposition it is his simple duty to strip it bare and hurl it down from its place of honor, no matter who suffers by it; any other course would render him unworthy of the public confidence.

I'm lying in bed at night trying not to scratch, I'm definitely going to close my eyes and think of Mark Twain.

Also, in Twain's spirit of public duty, I invite you to submit to me your questions about Toolik. Please let me know what you want to learn about, and I'll try to address it here, on my ScientificAmerican.com blog, or elsewhere.

Hey now, you're no wimp!
Also, I demand a photo of you in full-body mosquito repellant suit, because I have no idea what that would look like. I'm imagining a Hazmat sort of thing.

Twain is talking about not bedbugs, but fleas.

You need to do your next article on the various forms of predation of humans by insects, something it sounds like you are about to become a lot more familiar with on your current assignment.

Fun fact you can think about when fending off mosquitoes: when ancient Romans returned to vacation homes at the beginning of the season they would cover their slaves with milk and have them run through the place to get all the fleas to jump on them.

Oh slavery, is there anything you can't do?

Fleas, of course! Thanks, Thomas.