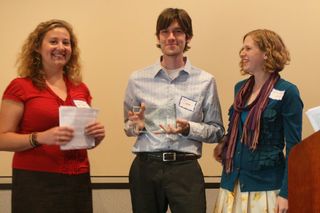 This weekend, I had the great pleasure of presenting the inaugural DCSWA Science Newsbrief awards, along with Christine Dell'Amore (of National Geographic News). The announcement is below.

Christine and I thought up the award during a van ride at the Metcalf Science Immersion Workshop for Journalists in 2007. At the time I was producing a one-minute science radio show, and Christine and I discovered that we were both vaguely discontent that our work was unlikely to be seriously considered for any awards because it was too short. As the ride got longer, we got punchier, and soon we had invented a new award called the Science Briefs Award -- which would have as the trophy a pair of men's briefs. Despite our silliness, we actually thought this was a great idea, and we decided to pitch it around to science writer organizations -- especially DCSWA, with which I had a relationship (I was a former VP). Nearly three years later, the DCSWA Science Newsbrief Award (sans actual briefs) was born. I'm a proud mama.

The first year of the award went surprisingly smoothly. The winning entries are clearly exceptional, and all the winners showed up to accept their awards and read their entries at the DCSWA annual Professional Development Day. The one important thing we forgot to mention in the press release and in the ceremony is that the winner gets $500! Not a bad payday for a story that's already by definition under 500 words.

Congratulations again to winners Sam (pictured in photo from DCSWA President James Riordon with Christine, left, and me, right), Helen, and Sarah.

Most science writing awards go to complex, multipart stories, but those awards often fail to recognize one of the most challenging -- and most common -- tasks of the science writer: writing short. Done well, short, accessible, accurate pieces make an enormous contribution to the public understanding of science.

DCSWA founded the Newsbrief Award in 2009 to reward journalists who excel at short science writing. All DCSWA members were eligible to submit written entries of 500 words or less.

The winner of the inaugural award is ScienceNOW's Sam Kean, for his piece "Mother's Cancer Can Infect Her Fetus." Judges said Kean used clear and straightforward reporting on a little-known topic with broad implications. One judge said the story was very readable and written in a tight, concise manner. Another said it "used compelling storytelling to convey an interesting medical story."

Sam works as a correspondent for Science and has written for The New York Times Magazine, New Scientist, and Mental Floss, among other outlets. He was the 2009 national runner-up for the NASW’s Evert Clark/Seth Payne award.

Two honorable mentions were also chosen. Helen Fields was recognized for "Groovin'," published in ScienceNOW. According to one of the judges, "I found myself smiling every time I read this." Another called it charming and a gem of a story.

Sarah C.P. Williams got an honorable mention for "The Power of One" in the HHMI Bulletin. Judges said this original story had a nice use of metaphor, and the clear storyline meant that readers did not get lost in the science.

A panel of five judges, past presidents of DCSWA, selected the winner and honorable mentions. They are Aaron Levin of Psychiatric News, freelancer Lisa Orange, Joe Palca of National Public Radio, Gail Porter of the National Institute of Standards and Technology, and Mitch Waldrop of Nature.

An award ceremony will take place during DCSWA's annual Professional Development Day on April 17 at the American Geophysical Union building in Washington, D.C.

The D.C. Science Writers Association is an organization of about 500 science reporters, editors, authors, and public information officers based in the national capital area. For more information or to join please visit www.dcswa.org. Details on how to enter the 2011 Newsbrief Award will appear on the Web site by the end of the year.

PIPE DREAMS: The Urgent Global Quest to Transform the Toilet is coming on April 6 from Avid Reader Press
Pre-order from Bookshop.org, Amazon, Barnes & Noble, BAM!, IndieBound, or your local bookstore.
Books and toilets: a great combination!
Here's my list of necessary reading from Bookshop.org.